Roderick Woomble (born 13 August 1976) is a Scottish singer, songwriter and writer. He is the lead vocalist of indie rock band Idlewild, with whom he has recorded nine studio albums. In 2006, Woomble released his folk-influenced debut solo album, My Secret is my Silence, and has since released four subsequent studio albums: The Impossible Song & Other Songs (2011), Listen to Keep (2013), The Deluder (2017) and Lo! Soul (2021).

In 2007, Woomble curated a collaborative studio album between Scottish writers and musicians, entitled Ballads of the Book,[1] and recorded a collaborative album with folk musicians Kris Drever and John McCusker in 2008, called Before the Ruin.

Idlewild was formed in 1995 by Woomble, Rod Jones, Colin Newton and Phil Scanlon.

In 2006, Woomble worked with several musicians including Kate Rusby, his wife Ailidh Lennon, songwriter Karine Polwart (to whom he presented the Horizon Award at the BBC Folk Awards 2005, and with whom he performed at Celtic Connections) and Idlewild guitarist Rod Jones on his debut solo album My Secret is my Silence, produced by John McCusker. The album was released in July 2006, and Woomble toured the United Kingdom in support of the album's release. My Secret is My Silence reached number one in the UK Folk Charts,[2] and a year later, on 10 July 2007, My Secret is My Silence was released in the US on 7–10 Music.

Woomble's follow-up album, Before the Ruin, written and recorded with Kris Drever and John McCusker, was released on 15 September 2008 through Navigator Records.

In March 2011, Woomble released his second solo album, The Impossible Song & Other Songs.[3] 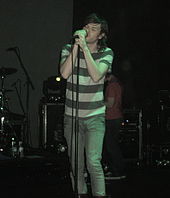 Woomble performing with Idlewild in 2007

Living in Edinburgh, he met Colin Newton and Rod Jones, both future members of Idlewild.[5] He moved back to the United States after the success of Idlewild's Top Ten album, The Remote Part, and lived in New York City for some time.[6]