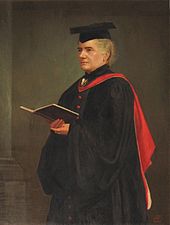 Agnes Smith Lewis (1843–1926)[1] and Margaret Dunlop Gibson (1843–1920),[2] nées Agnes and Margaret Smith (sometimes referred to as the Westminster Sisters) born on 11 January, were Arabic, Christian Palestinian Aramaic, and Syriac language scholars and travellers. As the twin daughters of John Smith of Irvine, Ayrshire, Scotland, they learned more than 12 languages between them, and became acclaimed scholars in their academic fields, and benefactors to the Presbyterian Church of England, especially to Westminster College, Cambridge.[1][2] 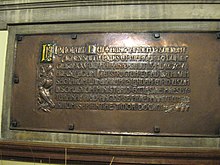 A plaque commemorating the Smith Sisters in Westminster College, Cambridge 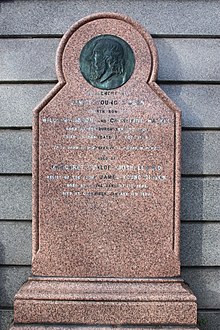 Agnes and Margaret Smith, twins born to Margaret Dunlop and John Smith, a solicitor and amateur linguist. Their mother died three weeks after their birth, and they were brought up by nannies, a governess, and their father.[3][1][2] They were educated in private schools in Birkenhead, Cheshire and Kensington, London (1853–62),[1][2] with travels in Europe guided by their father.[4]

After their father's death, they were left a large inheritance.[1][2] They settled in London and joined the Presbyterian church in Clapham Road.[5] Already conversationally fluent in German, French and Italian,[6] they continued to learn languages and travelled in Europe and the Middle East, including travelling up the Nile and visiting Palestine in 1868.[7] In 1870, Agnes wrote Eastern Pilgrims, an account of their experiences in Egypt and Palestine.[8]

In 1883, the twins, by then also quite fluent in Modern Greek, travelled to Athens and other parts of Greece,[9] beginning a lifelong affectionate relationship with Greek Orthodoxy, especially the monks in office at Saint Catherine's Monastery, Sinai.[10] On 11 September 1883, Margaret married James Young Gibson, a scholar trained for the ministry of the United Presbyterian Church, but later working on Spanish translations. In 1887, Agnes married Samuel Savage Lewis, a classicist, librarian, and fellow of Corpus Christi College, Cambridge. Samuel was also a clergyman. Each marriage soon ended with the death of the husband.[2][1] 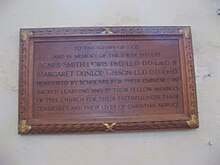 By 1890, the sisters settled in Cambridge. Agnes began to study Syriac. Inspired by Quaker and Orientalist J. Rendel Harris's account of his discovery at Saint Catherine's Monastery of a Syriac text of the Apology of Aristides they travelled to the monastery in 1892, and discovered one of earliest Syriac version of the Old Syriac Gospels next to the earlier known Curetonian Gospels, today British Library, which gave insight into the Syriac transmission and added valuable variants to New Testament studies.[11] It was one of the most important palimpsest manuscript find since that of the Codex Sinaiticus in 1859 by Constantin von Tischendorf. The year after (1883), they returned with three Cambridge scholars that included Professor Robert L. Bensly and Francis C. Burkitt, and their wives, as well as J. Rendel Harris, to copy the whole of the manuscript[12] The palimpsest manuscript was found to have been overwritten by the Lives of Holy Women in Syriac dated to 779 CE by John the Recluse as well as also having four 6th century folios with a Syriac witness of the Departure of Mary (Transitus Mariae) underneath.[13][14]

Her second most valuable attribution to the field of Aramaic (Christian Palestinian Aramaic, Syriac) studies and New and Old Testament text critique was the purchase of another unique palimpsest manuscript, the Codex Climaci Rescriptus, in Egypt (Cairo 1895; Port Tewfik 1906), and the largest batch from an anonymous Berlin (Germany) scholar (1905), containing underneath several individual manuscripts in Christian Palestinian Aramaic of various lectionaries with Gospels, Epistles, and Old Testament pericopes, an early apocryphal text Dormition of Mary with the hagiographic story of Peter and Paul (5th–7th century),[15][16] and Greek with Gospels (7th/8th centuries),[17] overwritten by the Syriac translation of Scala paradisi and Liber ad pastorem by the monk John Climacus of Sinai (8th–9th century), of which now surfaced the missing quire at Saint Catherine’s Monastery.[18][19]

After the return from their first trip to Sinai Agnes made herself acquainted with Christian Palestinian Aramaic (Palestinian Syriac) by the help of a script table by Julius Euting (German Orientalist).[20] Margaret learned Arabic.[21] During this expedition, Agnes catalogued the collection of Syriac and Margaret of Arabic manuscripts.[1][2][22] It was also on their first expedition (1892) that they were made acquainted with two additional, complete, and dated Christian Palestinian Aramaic (Palestinian Syriac) Gospel lectionaries B and C (1104, 1118), and remnant D in the library of Saint Catherine's Monastery,[23] which they edited 1899 in a synoptic version, including the earlier published Vatican Gospel A from 1030 (Vat. sir. 19).[24]

In their travels to Egypt, Agnes S. Lewis and Margaret D. Gibson were able to acquire among other unique manuscripts in Christian Palestinian Aramaic as e.g. an hagiographic palimpsest manuscript The Forty Martyrs of Sinai, and Eulogios the stone-cutter from the 6th–7th century (1906) overwritten by a Christian Arabic text (8th century);[25][26] a nearly complete eleventh-century lectionary in 1895[27] of Christian Palestinian Aramaic with noteworthy biblical pericopes, and later 1905 some of the missing folios from a German collector (Westminster College, Cambridge);[28][29] several leaves under Syriac Christian homilies where Agnes detected separate 7th and 8th century Qu'ranic manuscripts, which she and Alphonse Mingana dated as possibly pre-Uthmanic.[30][31][32] These palimpsest folios were lent to the exhibition “Internationale Ausstellung für Buchgewerbe und Graphik" in Leipzig 1914, and due to the outbreak of the First World War they were only returned in 1936 after the successful intervention by Paul Kahle.[33] They collected about 1,700 manuscript fragments and books including the acquisition of Eberhard Nestle library with rare editions,[1] now known as the Lewis-Gibson collection, including some formerly of the Cairo Genizah of the Ben Ezra Synagogue in Old Cairo, the earliest Hebrew fragments of a Ecclesiasticus manuscript, identified by Solomon Schechter.[34][35][36] The sisters continued to travel and write until the First World War when they slowly withdrew from their activity as scholars due to ill health.[1][2]

Though the University of Cambridge never honoured the two scholarly twins with degrees, they received honorary degrees from the universities of Halle, Heidelberg,[1][2][37] Dublin, and St Andrews,[1][2][38] and both were honoured in addition with the Triennial gold medal of the Royal Asiatic Society, the blue riband of oriental research in 1915.[1]

At Cambridge, they attended St Columba's Church.[39] They were generous hostesses at their home, Castlebrae, which became the centre of a lively intellectual and religious circle.[40]

St Columba's United Reformed Church, Oxford, established as the Presbyterian chaplaincy to the University of Oxford, with the help of the Smith sisters

The sisters used their inheritance to endow the grounds and part of the buildings of Westminster College in Cambridge.[1] This was long after Nonconformists were allowed to become full members of the Oxbridge universities by the repeal of the Test and Corporation Acts; and that Presbyterian college moved from Queen Square, London to a site acquired from St John's College, Cambridge in 1899. They also helped the establishment of the Presbyterian chaplaincy to the University of Oxford, now at St Columba's United Reformed Church, Oxford.

A collection of scrapbooks of press cuttings relating to Agnes Smith Lewis and Margaret Dunlop Gibson can be found at the Cadbury Research Library, University of Birmingham.[41]